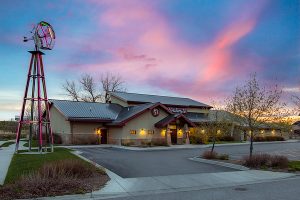 In the 1930’s, Toots Maybell opened the Windmill Club on 1st Avenue South in downtown Billings. The Windmill Club was primarily a dance club, serving beer and wine. Toots soon sold the business to Ralph Studer who later sold the club to Louis and Muggs Eastman in 1940. Louis and Muggs redesigned the interior and started serving a full service menu in 1947, seating up to 65 customers at any one time.

After over 40 years in business, the Eastman’s sold the supper club to John and Scottie Novasio. John and Scottie continued the Windmill tradition of tasty prawns, big lobsters and wonderful ribs. Well known for the red & white checkered tablecloths, red candles and of course the famous, but not-so-popular ladies room, the Windmill Supper Club continued the Eastman’s tradition of providing great food and service in a very unique atmosphere.

Then in the fall of 2005, John and Scottie announced that they would be closing the Windmill Supper Club and finally retire. With those few words came waiting lists longer than a reservation book could handle. Up until the final day of December 24th, 2005, customers flocked to the Windmill for one last chance at a plate of prawns, a pile of King Crab or a final wearing of the Windmill bib.

However, one of those faithful customers decided that the traditions and recipes of the Windmill Supper Club were just too good to be retired forever. Don Bottrell, a long-time Windmill customer, worked with John and Scottie on re-invigorating the basic principles of The Windmill: great food with great service in a beautiful new setting. Don has since passed away, but the basic principles and commitment is carried on with Jim Bennett and the hard-working staff that keeps The Windmill Bar 51 a continued local favorite.